< > Can we treat ourselves out of the HIV epidemic in Uganda? - < >
Latest News

I recently attended a very engaging and thoughtful debate at Makerere University’s School of Public Health in Uganda. The debaters were up-and-coming Ugandan Center for Disease Control (CDC) fellows, so the perspectives were largely Ugandan in nature.

It was a dialogue akin to an excellent secondary school debate, with proponents and opponents for the motion of the day – and a very topical one indeed, as it is 30 years since the onset of the HIV/AIDS pandemic, which started way back in the 1980s.

At the debate scientific evidence emerged that shows the HIV/AIDS epidemic could be eradicated through a universal ‘test and treat’ strategy, where everyone is tested for HIV annually and those found positive are put on medication. It was said that, instead of the gradual global treatment funding approach, a rapid spending strategy costing $63 billion could eradicate HIV/AIDS within five years. Scientists have shown through mathematical modeling that this rapid spending strategy could reduce the infectiousness of HIV-positive people to a degree where new infections are negligible.

A recent National Institutes of Health study among HIV-discordant couples shows that starting early on antiretroviral (ART) can reduce the HIV transmission risk by 96 percent, proving that ART is both a treatment and prevention tool. An observational study conducted in Rakai, Uganda, led by Steven Reynolds, which followed 51 discordant couples, found none of the couples contracted HIV while the positive partner was on ART.

eliminated mother-to-child transmission of HIV in the country altogether. 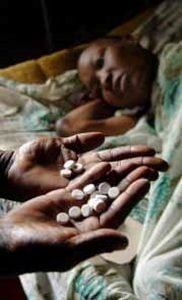 Those arguing that we can’t treat our way out of the HIV epidemic had a far easier task in the afternoon. They made the case that we lack the financial, human, pharmaceutical and laboratory resources needed to treat all those in need of ART. They also pointed to the fact that we don’t have the health systems to dispense these drugs in sub-Saharan Africa – including Uganda – and even if they were suddenly available that many countries have shown limited capacity for absorbing HIV/AIDS funding.

Auditor General’s report shows that many HIV/AIDS drugs have expired in our national medicine stores and will have to be destroyed.

even if all those eligible are put on ART. The proponents countered this with a study, which shows that those

on ART have displayed a 78 percent reduction in risky sexual behavior.

ART drug adherence would be problematic, the opponents went on, and lead to an even more complicated situation of drug resistance. They said possible low drug adherence would necessitate the use of second line drugs, which are considerably more expensive and not widely available in sub-Saharan Africa. They also argued that stigma is a barrier to

testing and treatment for HIV in Africa and would be a huge hurdle for any universal coverage efforts.

Where will theFINANCES come from for treating all those in need of ART? How sustainable can it be, fiscally speaking? Will the ‘usual’ donors pay for it? (And by usual donors what is meant are organizations such as the President’s Emergency Plan For AIDS Relief (PEPFAR), the Global Fund and the World Bank – in short, the West.)

Sarah Nakku, one of the proponents, argued that the ‘usual donors’ will pay. She acknowledged that, of course, it is a lot more complicated than this, not least because of the West’s on-going economic decline and donor fatigue. However, she argued that the West has a direct self-interest in combating HIV in Africa given the globalised world we live in. A travelling Ugandan can have breakfast in Kampala, lunch in London and dinner in New York.

Do we have the health systems within which to deliver these drugs in Sub Saharan Africa or at least in Uganda? The proponents say yes – that a skeleton infrastructure exists in Uganda and all we have to do is beef it up. This means paying doctors better salaries, equipping hospitals with labs and drugs and realizing that you don’t necessarily need medical degrees to treat HIV since lower-level health workers can be trained to do the job. (Again a little simplistic if only for argument’s sake.)

It emerged that 80 percent of the generic HIV/ AIDS drugs come from India, which is where Uganda and most AIDS-affected countries get ARTs, but that India has now been asked to stop the production of generic drugs because Western pharmaceutical companies hold the majority of these patents.

And then the audience weighed in. Prof David Serwadda, the debate’s chair, asked what would happen if we targeted key populations such as sex workers, truck drivers and fishermen?

It took truly global efforts to eliminate infections such as smallpox, river blindness and polio and the same can be done for HIV. What is the alternative anyway? The risk of not treating HIV is a lot worse than actually treating it. Studies show that expenditure on ART actually serves as anINVESTMENT for future generations and that spending on HIV treatment today is a lot cheaper than postponing treatment costs.

Indeed, one of the mathematical models presented shows that a radical spending kitty of $63 billion would eradicate HIV within five years, whereas spreading funding across 20 years will drive costs up to $90 billion.