According to the Committee’s consultation meeting road map, a total of 50 people and institutions were invited to appear to give opinions on the Constitutional Amendment Bill No.2 of 2017, between October 31 and November 21.

This publication has also learnt that at least 20 people invited by the Committee have declined to appear to give their stand. Nine more witnesses are scheduled to appear this week. So far, seven witnesses are in support of the removal of the age limits, nine are against while five have no position.

The private member’s bill tabled by the Igara West MP Raphael Magyezi seeks among other things to amend Article 102(b), which bars people below 35 and those above 75 years from standing for president. The proposed amendment of Article 102(b) became a source of controversy way before Magyezi formally tabled the bill before Parliament.

The age limit bill is strongly opposed by the opposition, a section of the ruling National Resistance Movement (NRM) party MPs, law dons, Civil Society Organisations (CSOs), and some religious leaders among others.

Those who have so far approved the lifting of the presidential age limits are seven including the mover of the bill, MP Raphael Magyezi, Justice and Constitutional Affairs Minister Kahinda Otafiire, National Resistance Movement (NRM) party, and Prime Minister Ruhakana Rugunda among others.

The others in support of the amendment are historian Dr Tanga Odoi who is the NRM electoral commissioner, Prof Tarsis Kabwegyere and a youth pressure group dubbed the Kick Age Limitations Out of the Constitution (KALOC).

These criticised the presence of Article 102(b) of the Constitution saying that it is discriminatory and that someone’s leadership capacity should not be limited by fixing age limits.

Besides the criticism, deputy NRM secretary general Richard Todwong claimed that Article 102(b) that provides for a lower and upper presidential age caps was smuggled into the Constitution in 1995. The Committee then directed Todwong to submit a copy of the Hansard he was referring to so that the committee analyses it.

Meanwhile, a copy of the Hansard dated Monday March 13, 1995 indicates how the Constituent Assembly (CA) chaired by the late James Wapakhabulo considered the draft Constitution. The Hansard specifically indicates the debate that preceded the insertion of Article 102 in the 1995 Constitution.

Those opposed to the lifting of the presidential age limits include opposition political parties such as the Conservative Party (CP), Democratic Party (DP), and Justice Forum (JEEMA) among others.

Their opinion before the committee is that the proposed amendment is meant to favour an individual – President Yoweri Museveni – yet a law is meant to be blind.

Not far from her submission, Prof Ssempebwa, the former chairman of a Constitutional Review Commission, noted that the Constitution had lost almost all its original checks and balances and now requires an entirely new review process or national dialogue to generate countrywide consensus.

“We are at a stage where the Constitution has changed drastically, not through legislative fear but mostly through practices of government, which has led to erosion of its checks and balances,” said Prof. Ssempebwa adding that; “The Constitution should not be amended based on party loyalties; we now distrust you (MPs) because your positions have hardened.” 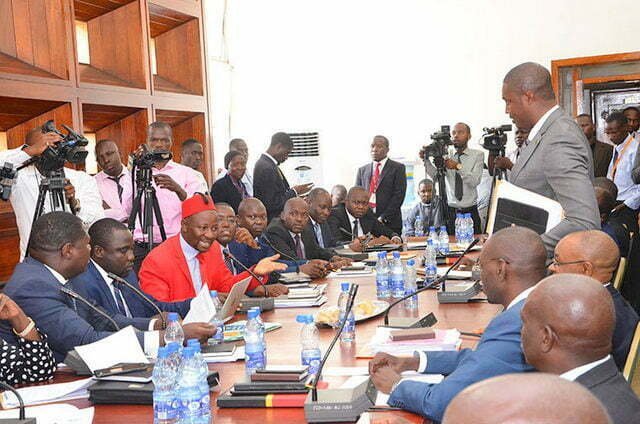 Mulira challenged the legality of the process saying that Parliament cannot use its legislative powers to amend the Constitution. He urged MPs to approach the bill with an open mind.

“If I were to approach this problem in a constitutional manner, it means that I don’t come with preconceived ideas that Article 102(b) is bad, I come to listen….and as a thinking person I decide where to fall,” he argued.

Some of these have written to the committee giving different reasons for not appearing while others expressed their opposition to the proposed amendment in the different media report.

“We had an extra ordinary general meeting on the 9th November 2017 and the meeting resolved that Uganda Law Society should distance itself from the process of amending the Constitution under the proposed Constitution (Amendment) (No.2) Bill 2017.’ reads part of the letter dated 10th November 2017 signed by ULS president Francis Gimara.

For FDC, the process of introducing the bill was flawed from the start and any process in the committee purporting to process what they described as an illegitimate Bill is in its self-illegitimate.

“We noted with dismay the way the legislative environment was destroyed by the invasion of the the Chamber. We are still nursing your own colleagues. We therefore decline to appear before the committee.” reads part of the letter signed by FDC acting president Alice Alaso, in reference to September 27 military raid on Parliament.

Some of these requested for more time to come up with positions on the Bill.

With more requests coming in from ordinary Ugandans and different groups seeking to appear before the committee, Oboth-Oboth told URN that his committee will entertain written submissions from these groups and individuals to save time.

“They are mainly in clusters and we are likely to give each 1 to 5 minutes to make their submissions since there are many who want to appear,” said Oboth-Oboth.