President Yoweri Museveni has revealed that former inspector general of police Gen Kale Kayihura is not the brain behind the crime preventers’ initiative.

Anyone with such a perception, Museveni said, should get it out of his head. Museveni’s revelation comes nearly a month after he axed Kayihura, replacing him with his deputy Martin Okoth-Ochola. Museveni said crime preventers is an National Resistance Army (NRA) project dating back to the 1980s.

Addressing over 3,000 crime preventers at MTN Arena Lugogo on Wednesday, Museveni said Kayihura was just a good cadre who implemented the project.

“So anybody who had an idea that this was a Kayihura project, please get it out of your head,” Museveni said, triggering applause and clapping from the audience.

“But Kale Kayihura was an active cadre who implemented that aspect of our strategy actively and I congratulate him for responding.” 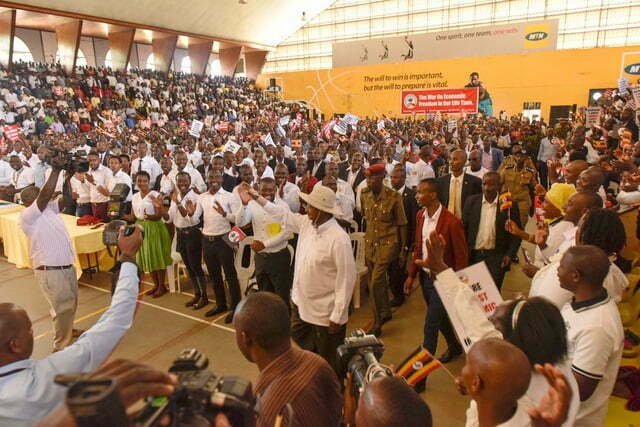 “Why I left you with the police is because you were dealing with the crime but in the end, you belong to the army… I now regard you as a reserve army for UPDF. My idea is to have a small army which is equipped but with a big reserve,” Museveni said, attracting more applause.

Apart from preventing crime, Museveni told crime preventers to be exemplary actors in poverty eradication in their homes and communities.

“Don’t be the one in a bar with swollen cheeks like a ripe banana, let your light shine,” he said.

Largely seen as a Kayihura project, The National Crime Preventers Forum (NCPF) describes itself as an umbrella body under which all crime preventers are organised and coordinated. It was founded in 2013 to promote community policing in Uganda in partnership with Uganda Police Force.

The fate of crime preventers was hanging in the balance, with some expecting the new IGP to disband the group that has been accused of crime promotion rather than crime prevention.

The precise number of crime preventers is unknown, however Kayihura had said they numbered to 12 million, a figure which was mentioned by the president today.

There is heavy police and military police deployment in Kampala and its neighborhoods. The deployment ……READ MORE