According to the statement issued by UPDF last evening, the 27th Battle Group will be commanded by Col Kosiya Kuteesa deputized by Col Rodgers Okiror.

Muhoozi in his address to the soldiers headed for tough times in war trodden country, challenged the combatants to use the skills they have acquired in these six months they have been on a special training.

“The Somalia mission is not a picnic; it is a war situation. It is a do or die mission. Watch each other’s back and ensure you adhere to the principles of war and standing operation procedures at all time,” said Gen Muhoozi.
More than 100 UPDF soldiers have been killed in Somalia by Al-Shabaab militias through surprise attacks, ambushes and Improvised Explosive Devices (IEDs).

The major incident that claimed lives of eight soldiers was in April last year when Al-Shabaab attacked soldiers as they returned to the camp.

Army explained that the battle that left these soldiers lifeless, ensued after the suspected Al-Shabaab terrorists attempted to attack AMISOM Forward Operating Bases at Quoroyole, Buulo Mareer and Golwen in Lower Shabelle Region of Somalia.

Gen Muhoozi counseled the combatants to conduct their operations bearing in mind that it is a war situation where operational mistakes can lead to loss of lives.

The CDF reminded the soldiers that Somalia mission is built on the UPDF’s pro-people ideology which is part of the reason for the Force’s successes in its operations.

“As opposed to the previous perception that the Somalia mission was an impossible one, with discipline and adherence to rules of engagement based on our pro-people ideology, we made the mission possible,” Gen Muhoozi said.

The CDF also urged the soldiers to concentrate on their military tasks and not be diverted by unfounded stories being circulated by enemies of the people. 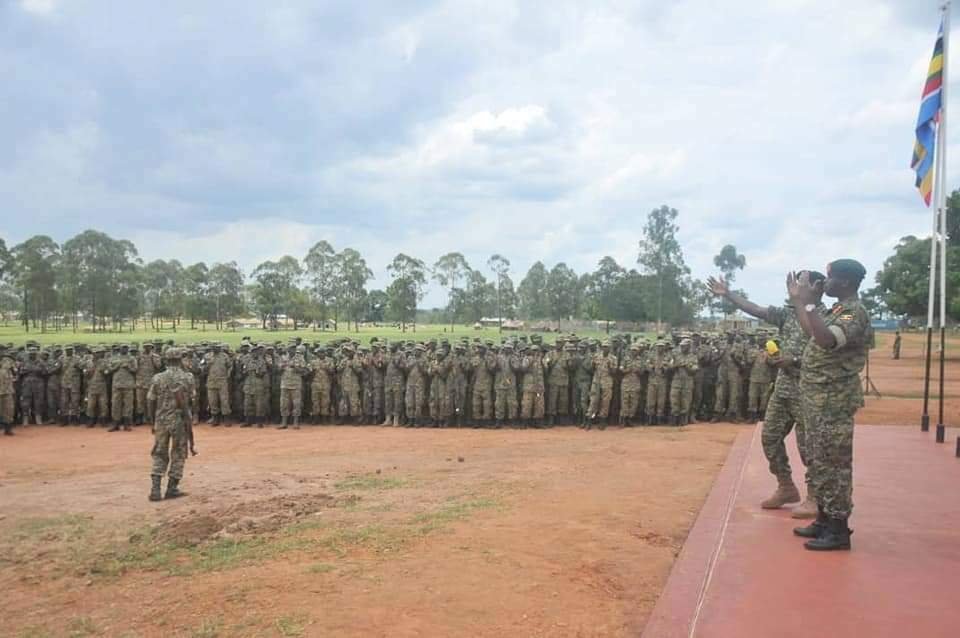 Gen Muhoozi was responding to concerns by soldiers that there were clues that on retirement, their packages would be paid less the salary advances they received during their annual leave.

“Get it from me. That is a lie. No one will tamper with your pension. You do not have to worry about that but rather focus on how you can improve your household income so that when you retire you can supplement your pension.” said the CDF.

The flag off event was graced by Commander Land Forces, Lt Gen Peter Elwelu, who also coordinates the Somalia Operations.

Others people who attended the ceremony were the Chief of Training and Recruitment Maj Gen Willis Byarugaba, and officials from US, UK and French Embassies in Kampala. Mr. Curtis Crum who is the country director for Global Peace Operation Initiative (GPOI) that helped in the mission training.