“I express my heartfelt hope that hostilities will finally cease, that the armistice will be respected,” the Pope told President Salva Kiir and rebel leader Riek Machar at the Vatican.

The Pontiff said he hoped “that political and ethnic divisions will be surmounted, and that there will be a lasting peace for the common good of all those citizens who dream of beginning to build the nation.” 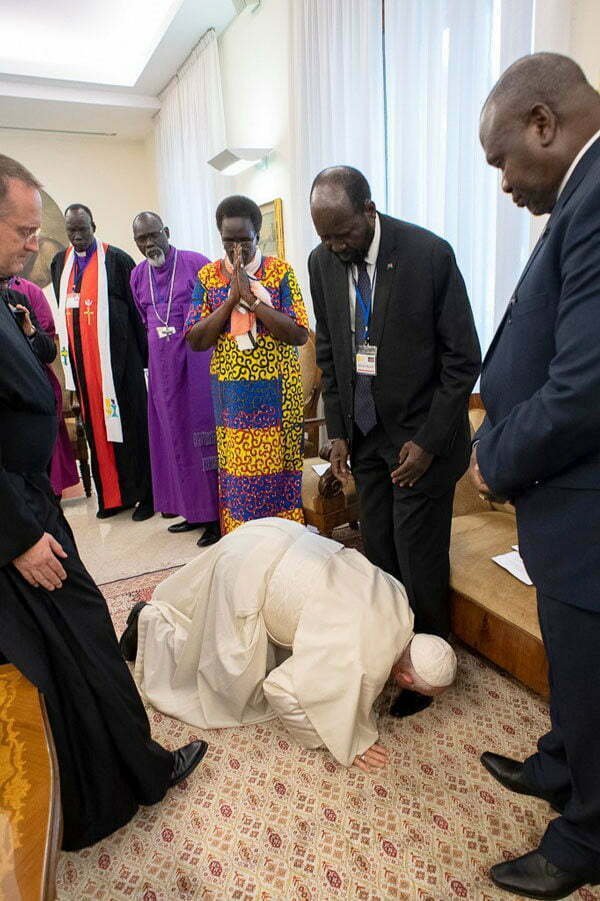 The arch-rivals last saw each other in October last year, shortly after the signing of a power-sharing deal, when Machar made a brief return to Juba for the first time since fleeing on foot in a hail of gunfire in July 2016.

Machar was Kiir’s vice president until a falling out in 2013 which kickstarted a civil war just two years after independence from Sudan.

Battles between those from Machar’s Nuer community and Kiir’s Dinka people were characterised by brutal violence, rape and UN warnings about “ethnic cleansing.”

The meeting between the two men had been billed as “an occasion for encounter and reconciliation, in a spirit of respect and trust,” the Vatican said, describing it as “both ecumenical and diplomatic at the same time.”

After the retreat, the pope kissed the South Sudanese leaders’ feet, saying: “Your people is awaiting your return to your country, the reconciliation of all its members, and a new era of peace and prosperity for all.”

“People are wearied, exhausted by past conflicts: remember that with war, all is lost! Your people today are yearning for a better future, which can only come about through reconciliation and peace.”

In 2015 a peace deal was signed that saw Machar return as vice president in 2016, but the deal collapsed within months, with fierce battles in the capital. The fresh conflict engulfed even more of the country.

Machar fled on foot to the Democratic Republic of Congo, and went into exile in South Africa and later Sudan which played a key role in the latest peace deal.

The power-sharing agreement will again reinstate Machar as vice-president, and the unity government is meant to be in place in May, however, observers warn implementation of the deal has stalled.

Crucially, the two men have yet to negotiate security control of the capital, moves to establish a national army, and other sticking points.

Several ceasefire agreements and peace pacts have failed to end the fighting, which has led to the death of an estimated 380,000 people, uprooted a third of the population, forced nearly two-and-a-half million into exile, and triggered bouts of deadly famine.

The intricacies of orphanages in Uganda

Orphanages are everywhere and seldom are they the efficiently-run organisations one sees on television. Oftentimes, ……READ MORE