The first two air crafts for the revived Uganda National Airlines have arrived.

The two Bombardier CRJ900 jets touched down at Entebbe International Airport at 9:55am morning amid ululations from guests signaling the official revival of Uganda’s national carrier, which was grounded in 2001.

Before landing, the air crafts first circled around the airport. President, Yoweri Museveni officially received the planes at 9:57am after being water cannoned, a common tradition when a country or company receives new planes.

People danced and shouted at the new dawn. The word Uganda Airlines spotted the sides of the planes. Uganda had finally gotten a national carrier. The two air crafts have registration number 5x-KOB and 5x-EQU. 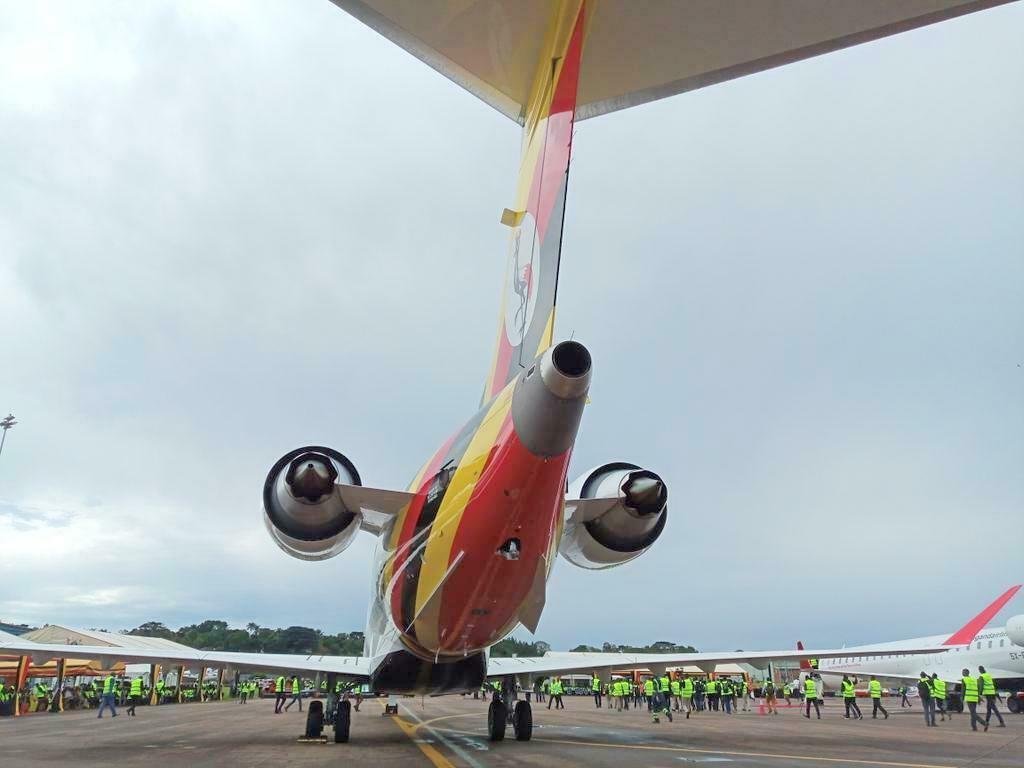 With its pilots further trained in Canada by the manufacturers, the pair flew out of Montreal on Friday and passed through northern Canada.

They then headed to Reykjavik, the capital of Iceland, before making their way to Maastricht in the Southeastern Netherlands. They would then connect to Cairo, Egypt from where they headed straight to Entebbe.

Last year, Uganda ordered for four CRJ900 regional jets as part of the much-anticipated plan for the revival of Uganda Airlines. The revived airline will be the first carrier to operate the new CRJ-series atmosphere cabin in Africa.

Atmosphere cabin design allows passengers to carry and store an “oversized” roller bag within the aircraft cabin bins, which minimizes the need to check bags at the counter or the gate.

Government paid Shillings 280 billion for the first two planes through a supplementary budget approval by Parliament. The Uganda National Airlines Company will operate the CRJ900 in dual-class configuration with 76 economy seats and 12 first class seats.

According to the manufacturer, the new model atmosphere cabin sets new standards of passenger experience in the regional jet market segment.

The first Bombardier was supposed to be delivered last month. But there were changes in the programme. The initial plan was that the manufacturer would be delivering a jet per month starting January. This arrangement will be followed after delivery of the first aircraft.

The revival of the national carrier has divided opinions with some government technocrats, including some at the Central Bank opposing it. Government maintained it needed a carrier to promote tourism and ensure national pride.