The duo is in Hoima together with other opposition leaders and MPs to bolster the campaigns of Forum for Democratic Change (FDC) candidate Asinansi Kamanda Nyakato for the Hoima Woman Parliamentary seat.

Hundreds of people welcomed the duo in a procession at Butema trading center about 5km from Hoima town on Monday afternoon. The procession paralyzed traffic for close to an hour on Coronation road when a team of security officers comprising of UPDF soldiers and Anti-riot police blocked Bobi’s convoy from entering the town centre.

This led to a verbal exchange between Bobi’s supporters and Hoima district police commander, Christopher Katumba prompting police to allow the convoy to proceed to Hoima Boma grounds where Nyakato launched her campaigns.

She is facing off with Harriet Businge Mugenyi from the ruling National Resistance Movement (NRM) party, who, also held her first rally in Buseruka sub-county this afternoon. 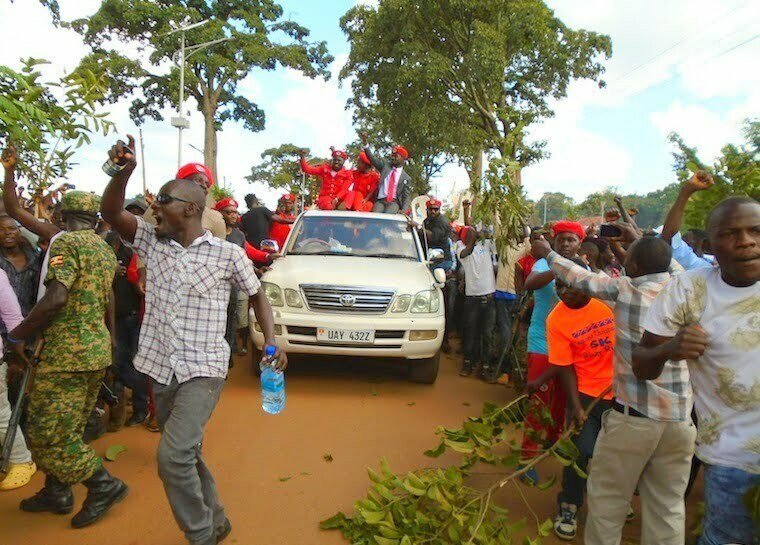 Both candidates were nominated last week. President Yoweri Museveni is expected to be in Hoima to campaign for the NRM candidate on September 24. The Hoima Woman MP seat fell vacant after Tophace Kaahwa Byagira, the former legislator opted to represent the newly created Kikuube district that was carved out of Hoima and became operational on July 1, 2019.

By 11am, police personnel had been ferried from the neighbouring districts of Kagadi, Masindi, and Kiryandongo to boost the team at Hoima Central Police Station.

The town has been a beehive of activities since morning with both motorized and foot patrols in the areas of Hoima Boma grounds, Government road, Coronation road, Duhaga roundabout, Kinubi and within the town center.

The Electoral Commission has set September 26 as the polling day.

All The Kings Men – Analysis By Timothy Kalyegira

Reject anything that will plunge country into violence – Oulanyah