< > Tension at burial of another People Power activist - < >
Latest News

Luweero, Uganda | URN | There was heavy deployment of Anti-riot police in Luweero town council ahead of the burial of a Boda boda rider killed in a procession involving the Kyadondo East member of Parliament Robert Kyagulanyi alias Bobi Wine.

Hakim Ssekamwa was killed on Tuesday evening in a nasty accident during a procession to escort Bobi Wine in Bombo town along the Kampala Gulu highway.

The legislator together with others were on their way to Kampala from Gulu where they are being tried in the Magistrate’s court for among others treason, inciting violence and disobedience of lawful orders. The deceased’s elder brother, Isma Mpiima, says the deceased was knocked by a trailer after being forced off the road by a police patrol vehicle registration number, UP 2525.

He sustained serious injuries and was rushed to Mulago national referral hospital where he breathed his last on Wednesday.

“We carried my brother to the nearest hospital, but on reaching the hospital there was no medicine. They asked us to fuel the ambulance which I did and we took him to Mulago Hospital. Before he died, he told me the police caused the accident because they attempted to knock him. As he tried to ‘dodge’ the patrol vehicle, he was hit by trailer on the other side. He kept apologising to me telling me he has left me with a big responsibility. It is very sad that I watched on helplessly as my brother breathed his last,” said Mpiima.

At Mulago, they were denied treatment after the family failed to raise Shs 270,000. This morning, a group of People Power activists led by Sam Serunjogi and Charles Ssebyala embarked on the deceased’s burial arrangements at his ancestral home at Kasana Piida in Luweero town council.

However, scores of police officers led by the officer in charge of Kasana police station, Sperito Banomugisha deployed heavily near the deceased’s home and along the Kampala-Gulu highway in Luweero town council. 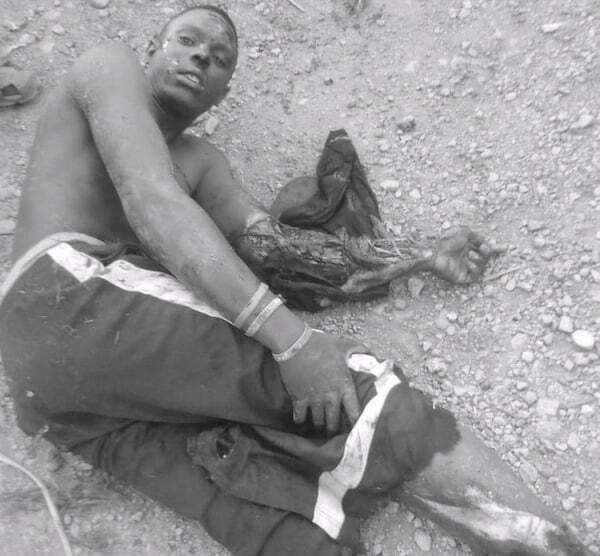 Police also summoned the organizers of the burial to provide a list of expected mourners following reports that Bobi Wine might show up at the burial. Both Serunjogi and Ssebyala defied the summons, saying they are busy mobilizing resources for the funeral.

“It is absurd, we happen to lose one of our gallant member of People Power, Hakim when he was following the convoy of his excellency Bobi Wine. Sadly as we were preparing for the burial police has deployed heavily, we do not know their agenda but I think they have been tipped off that HE Bobi Wine is coming to attend the burial…I ask the community to send off our colleague in a deserved way. It is not the police to tell us how we should bury. It is very absurd and shameful that police is now telling us how we should bury our relatives.” said Serunjogi.

Another police officer however said that they deployed to ensure smooth traffic flow. Our reporter saw several mourners donning the symbolic People Power red berets. The burial comes a day after the burial of another People Power activist who was also killed in an accident.

Michael Kalinda aka Ziggy Wine was laid to rest at his ancestral home in Katoma- Bukari, Kashenshero Mitoma district on Wednesday.

Kampala, Uganda | URN | Police are yet to get a clear picture of the ……READ MORE

What triggered floods in Uganda

Kampala, Uganda | URN | The current floods being experienced in Southern parts of the ……READ MORE